“I Don’t Know Who I’d Be without the Burns” 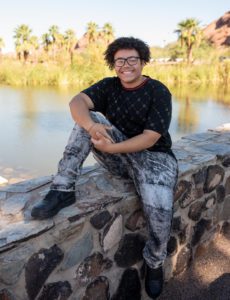 Chase was burned in September of 2021, while replicating a color changing fire experiment trending on Tik Tok. The bottle of rubbing alcohol used in the experiment exploded, leaving Chase with burns to 31% of his body. He spent the next three and half weeks in the Arizona Burn Center being treated for his burns. Once released, Chase struggled with strangers looking at him. Chase arrived at Camp Courage in June and was still struggling with being the center of attention. He quickly realized this is a community that understands him. “I liked how, no matter who you are, they treat you like a normal person as soon as you walk in there.” 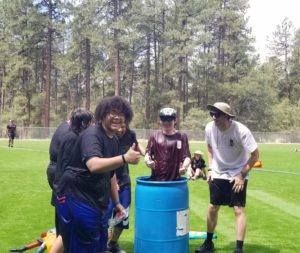 Chase faced his biggest fear on his first day of camp. He tried the ropes course, something he never expected to try! “It seems like a normal thing, but I jumped off of that tree and I felt a relief because I hate heights and I didn’t think I was going to do that in front of everybody. And doing that really, really helped me.” Chase found a new sense of confidence after facing his fear, and it continued to grow all week. 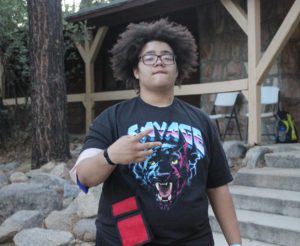 At the start he was nervous about making friends, but just like with the trapeze, once he took that leap and bonded with his cabin mates he opened up. By the end of the week, Chase didn’t care who was looking at him. Dance Night he danced his “butt off” in front of everyone, just because it was fun. Now Chase feels like there is nothing he can’t do. “I honestly feel like this has changed my life and it sounds weird, but I don’t know who I’d be without the burns.”

Nowadays, Chase doesn’t feel the need to hide his scars. He is vocal about warning others that even though a video on Tik Tok might look cool, fire is very dangerous and you should not try it at home!