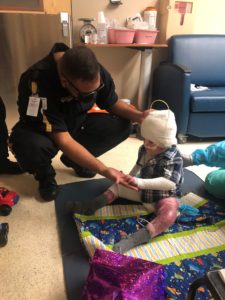 Westyn, his twin brother, and his 4-year-old sister live in Yuma. On Veteran’s Day, the family was cooking in their new fire pit when Westyn tripped and fell into the fire. Westyn’s mother swiftly grabbed him and extinguished the flames by rolling him. Westyn had sustained severe burns to his head, back, arms and legs. He was rushed to the local hospital but flown to the Arizona Burn Center at Valleywise Health due to the severity of his burn injuries.

He struggled with his breathing and it was determined that he also had COVID 19. Westyn was placed on a ventilator, he was the youngest patient in the COVID 19 unit. After several months of care and treatment, Westyn transitioned off the ventilator and was able to be more engaged in his own healing. Westyn’s parents have become very close to ABF over the past few months because they receive regular encouragement and resources to help them during their son’s healing process. 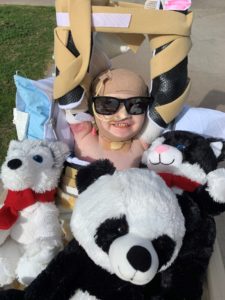 ABF is assisting with the lengthy lodging support needed to allow the family to travel from Yuma to Phoenix. This allows Westyn to see his parents every day. His parents have been able to be with him from holding him for the first time in the ICU setting, to watching him open up his eyes, and most recently having his tracheostomy tube removed after three long months. Westyn even celebrated his birthday in the hospital, and thanks to the ABF, he and his twin brother Wyatt received a special surprise care package from their favorite hero – Blippi!

This family is so very grateful for all the care and support from the ABF community. Westyn will be able to return home in the near future. He has become a beacon of hope with his bravery through his numerous procedures, constant smiles, and friendly waves to all.