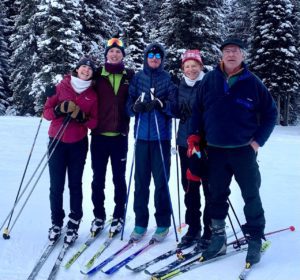 When 21 year old Rick Meinig lay in a burn unit following a chemical explosion in a Boston lab in 1979 his overwhelmed mother had no knowledge of any support groups for burn survivors or their families. Years later when Kathy Meinig filled in as a physical therapist in burn units in Denver and Iowa she knew of few support groups to whom to refer patients. I am sure that there were such groups available however we did not appreciate how valuable they could be so we did not seek them out. This changed in 1998 after our son Erich was injured in a car accident sustaining 85% burns. We were directed to Camp Courage in Prescott AZ and from there we took advantage of the Arizona Burn Foundation’s many resources to help with everything from information on school re-entry to education and updates on current research.  What a difference the knowledge and community made for us and our whole family. We appreciate ALL that you do and our support for your Adopt-a-Family at Christmas is a small token of our thanks.  Keep up the good work.

Updates: Following his accident in 1979 Rick took a leave of absence from his job and applied to medical school.  Several years previously while on a climbing expedition to make the second ascent of Denali’s East Buttress, a member of the group was an orthopedic surgeon who inspired Rick to consider a medical career. Rick’s experience as a burn patient solidified this decision. Kathy took time off of work after Erich was injured but returned to work as a physical therapist and is now working part time doing home health.

Our son Erich is now 29 years old. He attended Camp Courage for many years and both he and his sister Elisabeth spent a few summers as teenagers being councilors at Camp Courage. Erich recently finished his graduate degree in mechanical engineering and is living in Colorado Springs.