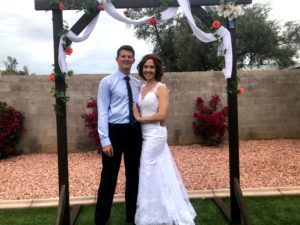 Connor and Christina were married in March of 2020, right around the time that COVID restrictions were limiting large gatherings, cancelling events, and changing plans. Aspects of their wedding day and future honeymoon plans had to be changed and re-assessed but the love between Connor and Christina never wavered. Their lives were changed a few months later, on October 26th, when Connor was injured in a chemical explosion and rushed to the Arizona Burn Center. Connor’s burns were extensive – 2nd and 3rd degree burns over 25% of his body including hands, arms, face, neck, and ankles. While waiting for news on her husband’s injury, Christina met another patient’s family member who introduced her to the Arizona Burn Foundation. Thinking back to that time, Christina shared this:

“Being barely over 7 months married, we were still establishing a life together and Arizona Burn Foundation was an incredible support for us, me in particular. Knowing your spouse personally, but not necessarily having the hard details of bills and information memorized yet, could have been insanely overwhelming.”

The injury happened at work however, Worker’s Compensation was not an option, which left the couple with one income and bills piling up. Christina’s employer was able to ease some stress from Christina though, “it was almost as if ABF and my job joined forces to allow me to be there for Connor as much as possible, and it meant the world to both of us.” Connor had multiple surgeries, therapies and even battled pneumonia but still healed quicker than expected. Connor was in the burn center for about 30 days and then spent another few days at rehab before finally being discharged home – just in time for Christina’s birthday.

Says Christina, “stress can be a huge detriment to someone’s healing in any situation, and thanks in large part to ABF, we didn’t have nearly as much to be stressed about. I don’t know what we would’ve done without them.”