Sam was burned while playing outside with his older brother when a lighter caught his pajamas on fire and 14% of his body was burned, including his face, neck, and torso. Julianna, Sam’s mom, felt overwhelmed in the hospital, but her family and the Arizona Burn Foundation were there to listen and support her. So Juliana kept faith that everything would be okay. 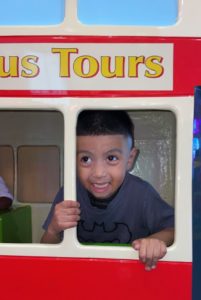 Sam experienced a few recovery setbacks upon his discharge. He had neck contractions that locked his neck in place. Julianna describes his first skin release and consistent wound care schedule as a breakthrough in his recovery! Juliana smiles as she recalls the feeling of relief when things changed for Sam, she states, “It was a game changer!”

“He was able to move his neck. He’s able to look up and down. He’s able to go side to side and before he couldn’t do any of that, and he was just stuck… now he’s thriving.”

Through everything the Arizona Burn Foundation was there supporting Julianna and Sam. Julianna states, “Kelsey (ABF’s social worker) was a lot of help for resources and I knew I could talk to her. If it wasn’t for her, I think I would’ve given up and I couldn’t appreciate her and the foundation more for that…She made sure I had everything I needed to be successful going through this.” Julianna is thankful ABF was there to help her learn more about what having a child with burns looks like. “Anything I needed, your doors were open to me, and I appreciate that.”

Julianna describes this as the worst experience of her life, but now Sam loves that he looks different. “We’re able to go to Big Surf and he’s willing to show his skin. He’s proud of it, and he’s loud about it.” She also appreciates the support programs that have connected Sam with fellow child burn survivors. Julianna tells us, “Sam sees there are other kids out there like him. He really realizes, Wow, we’re beautiful. I couldn’t thank ABF enough for the experience we’ve had with you.”

ABF programming is made possible by the generosity of supporters like you. To learn more about making a donation, please click here.